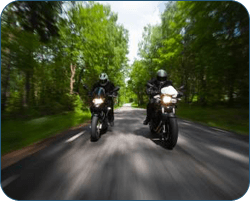 Although we have one of the best ‘road safety’ records in Europe and the world, accidents still happen!

Even though there is annual increase for vehicles using our roads and motorways the number of people killed on our roads has fallen from around 5,500 per year in the mid 1980s to well under 1,754 in 2012.

Sadly, driver error remains the most common cause of road accidents.

However, this still means that five people die on Britain’s roads every day.

It’s enough to chill your blood on the warmest day. You’re driving along a familiar road on holiday or to work. But your progress is suddenly hampered by ominous signs; an ambulance screeches past and there’s an unexpected traffic jam.

Common causes of these unnecessary tragedies include:

Speeding
Around 400 people a year are killed in crashes in which someone exceeds the speed limit or drives too fast for the conditions.

Drink Driving
Around 280 people die a year in crashes in which someone was over the legal drink drive limit.

Seat Belt Wearing
Around 200 lives each year could be saved if all drivers wear a seat belt for every trip.

Careless Driving
More than 300 deaths a year involve someone being “careless, reckless or in a hurry”, and a further 120 involve “aggressive driving”.

Work related
Around one third of fatal and serious road crashes involve someone who was at work.

Inexperience drivers
More than 400 people are killed in crashes involving young car drivers aged 17 to 24 years, every year, including over 150 young drivers, 90 passengers and more than 170 other road users.

What is Roadside First Aid

First Aid is a skilled application of accepted principles of treatment of any injury or illness, using facilities or materials available at the time. It is an approved method of treating a casualty until placed in the care of a doctor or other skilled aid or removed to hospital.
Your responsibility ends when the casualty is handed over to the care of a nurse, a doctor or other appropriate person/s.

Your first priority is ensuring your own safety

When approaching an accident scene the most important element is your safety. Make sure that all traffic has stopped and it is flagged up that there has been an accident otherwise there may be additional casualties. Be aware of oncoming traffic to ensure that is not posing an additional danger.

If the casualty has stopped breathing:

Crash helmets should not be removed
because they can act as a splint for the skull, or the casualty could have a broken spine or neck. Only remove to control bleeding or free the victim’s airway.

If bleeding is present
the total quantity of blood circulating in the body of an average adult is 10 to 11 pints (approximately 6 litres). When a lot of blood is lost, the vital organs are deprived of fresh supplies of oxygen, and shock develops. Apply firm hand pressure over the wound, preferably using clean material, without pressing on any foreign body in the wound. Secure a pad with a bandage.

Reassurance
until help arrives. Prompt treatment will minimise shock. Reassure the casualty, avoid unnecessary movement, keep the casualty comfortable, and prevent them getting cold. Do not leave a casualty alone.
Give the casualty NOTHING to eat or drink. They may need an operation when they get to hospital.

Car first aid kits can be bought from most car accessory shops or local chemists, or you can make one up yourself. All you need is:

Roadside First Aid Always carry a first aid kit – you might never need it, but it could save a life. The more people that are trained in basic first aid and the more people that carry first aid equipment in their car, the more likely it is that somebody on the scene can provide assistance until an ambulance arrives and improve the chances of a positive outcome!

Please follow the links for information on courses in emergency life support (including CPR).

For information regarding Road Safety, visit the www.direct.gov.org section http://think.direct.gov.uk/ THINK! which provides road safety information for road users. Their aim is to encourage safer behaviour to reduce the number of people killed and injured on our roads every year.