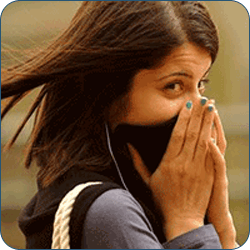 Asthmatics were left more vulnerable as ambulance services across the UK reported a sharp rise in 999 calls from people suffering breathing problems and related health conditions after the serious smog storm blanketed parts of the Country.

Millions of vulnerable people in southern England and Wales were advised to stay indoors as unusually high levels of air pollution smothered London and other cities, just weeks after heavy pollution led to restrictions on car use and the offer of free public transport in Brussels and Paris. Drivers across Britain were left slightly confused after finding a thin coating of red dust on their cars. This unusual weather condition has affected millions of asthmatics across the country.

Asthmatics affected most by the red storm

Those with lung and heart conditions have been told to avoid strenuous activity outdoors while people suffering symptoms of pollution – including sore eyes, coughs and sore throats – should cut down the amount they do outside, health experts said.

Asthmatics have been warned of the need to use their blue reliever inhalers more often as they could be prone to attacks while the red dust is in the air.

Around two-thirds of the 3.6 million people with asthma find that air pollution makes their asthma worse.

Around two thirds of asthmatics say that air pollution can trigger their symptoms so if this includes you here are some top tips for coping with smoggy air conditions:

1. If smoggy conditions set off your symptoms then you should try to avoid going outdoors,especially in the afternoon.

2.We know that staying indoors isn’t always possible,so it is even more important to check you have your reliever inhaler with you when you go outside. If necessary,take some before you go outside.

3. If you have to go outside,then it’s best to avoid doing any type of outdoor exercise.

4. If you are outside, it is best to try to plan your day to avoid busy traffic areas and car fumes.

5. Have a look at air quality levels in your area. This will help you to plan ahead if the pollution levels are going to be high.

1. Red dust storms can cause air pollution to increase to “very high levels” and can aggravate asthmatics with breathing problems. Health professionals warn the dust may irritate lung tubes and cause asthma to flare up.

2. While it may not be healthy for humans, Saharan dust can prove beneficial for the environment. Trees and plants in the Amazon Rainforest rely on the nutrient-rich dust, which helps to keep the area fertile, ‘New Scientist’ reported.

3. However, researchers have also linked Saharan dust to coral disease. Coral reefs in the Caribbean have been in a state of decline since the 1970s. Scientists from the ‘US Geological Survey (USGS) Centre for Coastal Geology’ believe this decline in the Caribbean is a result of pathogens transported in dust from North Africa.

4. Growth of algae blooms in a phenomenon known as red tides.The toxic blooms have been responsible for the deaths of huge numbers of fish, marine mammals and birds in the past. They can also have an impact on human health by causing respiratory problems for those living near a shoreline.

5. Asthmatics cause for concern is very much justified as dust clouds from the Sahara are often so big they can be seen from space. Space station crew members frequently report seeing Saharan dust masses as very widespread atmospheric haze, according to NASA.

6. These dust palls blowing from Africa can be lifted as high as 15,000 feet and transported across the Atlantic Ocean. Scientists found dust from the Sahara influences levels of precipitation as far as California because of a hot, dry, dusty layer of air known as the Saharan Air Layer.

Please see our First Aid Training Course that covers asthmatics – conditions and how to treat a casualty suffering from asthma. For more information on we can help you find the right training courses for your business please email us. Or alternatively, call us on 0800 088 6551 and speak with one of our training Consultants.