During the ‘opening’ and ‘introduction’ of our first aid courses, our first aid trainer may ask the delegates this question: ‘What would you like to learn from this training course?’

It gives us a good idea of what the delegate’s expectations are and can be used as a good discussion point to funnel the interest of everyone.

For the paediatric first aid and the one day emergency first aid training courses we deliver, the majority of the delegates attending are parents. END_OF_DOCUMENT_TOKEN_TO_BE_REPLACED 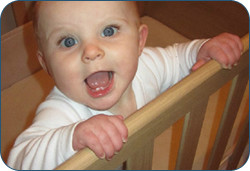 The death of Millie Thompson in 2013 at a Manchester nursery has forced a Westminster debate on making first aid training compulsory for all child care and nursery staff.

More than 100,000 people signed the e-petition started by Dan and Joanne Thompson after their nine-month-old baby Millie died after choking on food at the Ramillies Hall nursery in Stockport two years ago. They are campaigning to make such training readily available for minimal costs and in as many places as possible. END_OF_DOCUMENT_TOKEN_TO_BE_REPLACED

5.0
30
Millies Trust – Campaign to train all nursery staff in Paediatric First Aid was last modified: May 26th, 2019 by Mark Cody

Although we have one of the best ‘road safety’ records in Europe and the world, accidents still happen!

Even though there is annual increase for vehicles using our roads and motorways the number of people killed on our roads has fallen from around 5,500 per year in the mid 1980s to well under 1,754 in 2012.

Sadly, driver error remains the most common cause of road accidents. END_OF_DOCUMENT_TOKEN_TO_BE_REPLACED

The findings of your first-aiders needs assessment will help you decide how many first-aiders are required. There are no hard and fast rules on exact numbers and you will need to take into account all the relevant circumstances of your particular workplace. END_OF_DOCUMENT_TOKEN_TO_BE_REPLACED

Who is responsible for First Aid in Schools?

The Management of Health and Safety at Work Regulations 1992 require employers to carry out a suitable and sufficient assessment of the risks to the health and safety of all employees at work and others who may be affected by their undertaking, such as pupils and visitors, to identify what measures they need to take to prevent or control these risks.
END_OF_DOCUMENT_TOKEN_TO_BE_REPLACED

Captain Noel Chavasse was born in Oxford and packed a lot into a life which ended, at the age of 32, in a captured German dugout during the Battle of Passchendaele, also known as the Third Battle of Ypres.

He was a prize-winning academic, qualified as a doctor, played rugby and represented Great Britain in the 1908 Olympics, running alongside his twin brother, Christopher, in the 400m.

The recipient of this exceptional double honour was not even a frontline soldier:

Captain Noel Chavasse, a bishop’s son, was a medical officer attending first aid duties in the trenches. But this did not stop him from being responsible for some of the bravest and most unselfish acts of the entire conflict. END_OF_DOCUMENT_TOKEN_TO_BE_REPLACED

It is important that childcare provision is safe. Providers must have measures in place to prevent and minimise injuries to children and take precautions to avoid infection.

The qualification must be appropriate to the ages of the children for whom childcare is provided and to the nature of the provision. END_OF_DOCUMENT_TOKEN_TO_BE_REPLACED

What is a childminder or child carer?

a registered Childminder is a childcare professional working in their own home to provide care and education for other people’s children in a family setting.

They have to be inspected and registered by Ofsted (the Office for Standards in Education) in England, the SCC in Scotland (Scottish Commission for the regulation of Care in Scotland), the CSSIW in Wales (Care and Social Services Inspectorate Wales), or the HSE (Health Services Executive) in Ireland. END_OF_DOCUMENT_TOKEN_TO_BE_REPLACED

As part of its ongoing ‘Start a Heart‘ campaign, South Central Ambulance Service (SCAS) NHS Foundation Trust is delighted to be the first ambulance trust in the UK to launch a Lifesaving app that locates the nearest Automated External Defibrillator (AED). END_OF_DOCUMENT_TOKEN_TO_BE_REPLACED

Asthmatics were left more vulnerable as ambulance services across the UK reported a sharp rise in 999 calls from people suffering breathing problems and related health conditions after the serious smog storm blanketed parts of the Country.

Millions of vulnerable people in southern England and Wales were advised to stay indoors as unusually high levels of air pollution smothered London and other cities, just weeks after heavy pollution led to restrictions on car use and the offer of free public transport in Brussels and Paris. Drivers across Britain were left slightly confused after finding a thin coating of red dust on their cars. This unusual weather condition has affected millions of asthmatics across the country. END_OF_DOCUMENT_TOKEN_TO_BE_REPLACED