You may have already seen the new Liverpool Citybike ‘Bike Stations’ appearing at many locations throughout Liverpool and it does look like a success since its launch in May 2014. 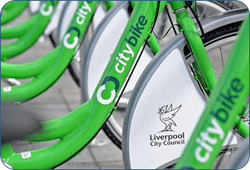 The bikes can be hired by businesses, tourists and members of the public to get round the city.

Mayor of Liverpool Joe Anderson added: “This is a huge milestone in the city’s cycle hire ambition and I’m delighted the scheme is now under way and ready for people to make the most of.

“The Liverpool Citybike scheme means people can get around quickly and easily using a green mode of transport which also results in a healthier lifestyle for those who cycle around the city.

“We hope to see a strong take-up for the scheme and have made it as easy as possible for people to register online and then hop on a bike at locations across Liverpool.”

Liverpool council, which is funding the scheme with a £1.5m grant, will begin by opening Citybike stations in the city centre, before rolling it out further to areas such as Lark Lane and Sefton Park.

The bikes cost £3 per day to hire with a £1-per-hour charge for any cycling time over two hours.

A weekly hire costs £9 with an additional charge of £1 for every hour over four hours.

An annual subscription is available for £60.

Once concern that has been brought to light is the lack of safety regarding the Liverpool Citybike ‘users’. With an increase of people using this scheme it does become apparent that there will be a reduction in cyclists wearing safety helmets – as helmets do not come as standard with the bike hire.

Should cycle helmets be made compulsory for Liverpool Citybike users?

There will always be people, such as regular cyclist Boris Johnson, who object to the infringement of civil liberties involved, though he does now wear a helmet. Is it the government’s job to stop us injuring ourselves?

The most compelling evidence against helmet legislation, comes from, oddly – Britain’s biggest pro-cycling charity, CTC. It argues that forcing everyone to wear helmets would have huge unintended consequences. Namely, it would discourage hundreds of thousands of people from getting on a bike, which in turn would make Britain an unhealthier place. The charity is supported by the Transport Minister, Norman Baker, who himself does not wear a helmet.

Back in the early Nineties, mandatory helmets were introduced in Australia and failure to comply resulted in a fine. Across the country, cycling numbers fell, especially among teenagers – the group most concerned about their hairstyles. Helmets were uncool, it seemed. Among female secondary pupils in Sydney, cycling rates fell by 90 per cent. And the popularity of cycling in New Zealand appears never to have recovered since it introduced its own law in 1994

Department of Transport figures reveal a huge increase in cycling injuries in London, which has the highest cycling casualty rate in Britain.

More than 4,600 people were injured last year — an increase of more than 20 per cent on the year before.

According to The Royal Society for the Prevention of Accidents, 19,000 cyclists are killed or injured in road accidents each year. St John Ambulance believes that no cyclist should die in conditions where first aid could have been the difference between life and death. There are a number of First Aid Courses available specifically aimed at cyclists in the City and these should be part of the Citybike campaign. 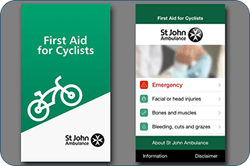 This app is targeted specifically at cyclists and is based on the most common injuries experienced by cyclists on Britain’s roads.

We want all cyclists to know first aid, so that they could be the difference between life and death in an emergency. St John’s Ambulance added “The advice in this app is based on our First Aid Manual and advice from our medical experts.”

The app aims to equip cyclists with the necessary first aid skills and knowledge so that if required a cyclist can follow the app’s instructions. It also explains how bike equipment can function as first aid instruments.

For more information on this app or if you would like to download this onto your phone please visit the I Tunes store here: https://itunes.apple.com/gb/app/first-aid-for-cyclists/id891259656?mt=8

For more information on the Liverpool Citybike scheme please visit the website: https://www.citybikeliverpool.co.uk/

5.0
05
Should cycle helmets be made compulsory for Liverpool Citybike users? was last modified: September 30th, 2019 by Mark Cody