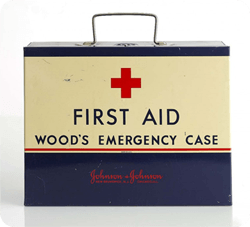 First Aid Kit – With first aid kits being a common feature of everyday life, you would be forgiven for thinking that they have been around for centuries.

However, did you know that the first ever first aid kits were only created in 1888 on the back of an incidental conversation? With the first aid kit celebrating its 128th birthday this year, let’s take a look at how they were developed and how they have become so popular in such a short amount of time.

In the late 1880s, a gentleman called Robert Johnson (cofounder of Johnson and Johnson) was taking a train journey through the Rocky Mountains when he got talking to a fellow passenger, who happened to be a Railway Surgeon. Railway Surgeons (often General Practitioners who had some experience of performing surgery) were hired by the railway companies specifically to assist employees working on the railways. Making the most of the opportunity for conversation, the Railway Surgeon began telling Mr. Johnson all about his job and some of the gruelling cases he had faced whilst at work. 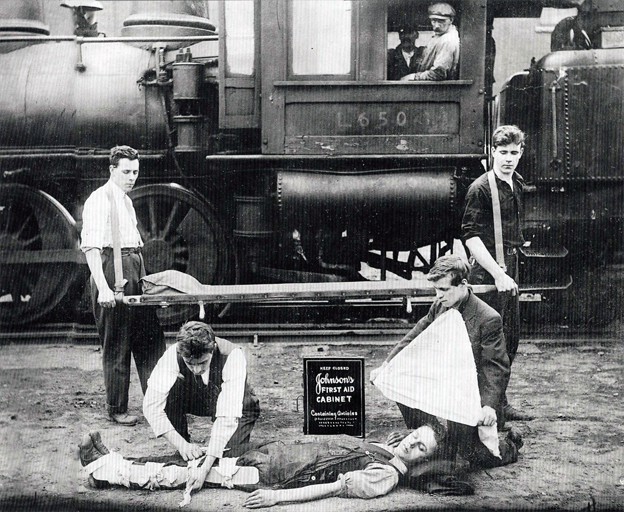 Working on the railways in the 1800s was an extremely dangerous job, with workers often being injured due to the nature of the work they had to complete. With railways spanning huge distances, it also made the job of the Railway Surgeon extremely difficult as they often had to work in remote locations, where access to sterile medical supplies was very uncommon and access to further medical assistance was often too far away to be of any help in an emergency.

Hearing the somewhat gruesome tales from the Railway Surgeon sparked an idea with Mr. Johnson – what if sterile gauze and other supplies were kept on trains and in areas where employees were working on the railways? That way, in an emergency the Railway Surgeon could stabilise the casualty before they were sent to the nearest place that could provide further treatment.

The beginning of the First Aid Kit

In June 1888, Mr. Johnson sent letters to a number of Railway Surgeons to ask what they would like to have available in an emergency. Here is an extract from the letter that he sent:

“It is a fact, which is everywhere being recognized, that many lives are lost and much suffering entailed in such accidents on account of the lack of the simple but necessary articles required to afford prompt assistance to the wounded.”

After collating their responses, in the same year Johnson & Johnson released the first ever Railway Station and Factory Supply Case, which combined a number of sterile supplies in a specifically marked railway box.

However, ever the innovator, Johnson did not stop there. Alongside this, he recognised that the public could also benefit from having medical supplies available and simultaneously released a second first aid kit for commercial use. This proved extremely popular and by 1889 Johnson and Johnson had released 18 different kits for different places where the need was identified. Each First Aid kit had its contents tailored depending on where it was to be used, e.g. the home, workplace or public building.

Some kits were also tailored depending on the circumstances in which they would be used, for example soldiers on the battlefield who may have more substantial injuries, or for those who had been unlucky enough to be bitten by a snake. As time progressed and with public demand only becoming stronger, first aid kits rapidly started to gain in popularity and in use.

So there you have it. In the space of 1 year, a chance discussion resulted in a First Aid kit that has since revolutionised first aid around the world. Whilst the contents may have evolved somewhat since then, the main aim of helping to save lives still remains at the heart of the first aid kit today. So next time you see a humble first aid kit hanging from the wall, spare a thought for the Railway Surgeon who sparked the idea with Mr. Johnson and unknowingly saved countless lives.