Accidents still happen in the workplace on a daily basis despite the rigorous controls of safety measures such as ‘in house’ risk assessments and ‘real time’ daily safety supervision. 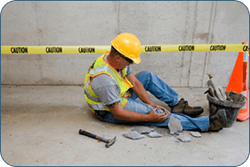 So why do accidents still occur? Everyone can make errors no matter how well trained and motivated they are. However in the workplace, the consequences of such human failure can be severe. Analysis of accidents and incidents shows that human failure contributes to almost all accidents and exposures to substances hazardous to health. Many major accidents e.g. Texas City, Piper Alpha, Chernobyl, were initiated by human failure. In order to avoid accidents and ill-health, companies need to manage human failure as robustly as the technical and engineering measures they use for that purpose.

Accidents in your workplace – Managing your Health and Safety Policy

In 2006, a senior lifeguard at a gym mistakenly added chlorine granules to an acid tank rather than the chlorine tank. The result was a potentially deadly chlorine leak, which led to the evacuation of the whole building and five people being taken to hospital.

Fining the gym £15,000, the judge said the incident was largely due to “an alarming lapse of concentration” on the part of the lifeguard, who was both trained and experienced. The Companies risk assessment had taken into account the possibility of human error: the tanks were colour-coded, the keys were kept securely, and a written procedure required a second person to be present during dosing.

The judge acknowledged the safety document “was of a high standard”. But the Company had failed to ensure the policy was put into practice. Staff and management alike bypassed the correct procedure, creating the conditions in which a momentary lapse could lead to a serious incident.

Accidents in the workplace; Human error is inevitable – but that doesn’t mean it has to lead to injuries.

Human error is thought to be a factor in as many as 90% of workplace accidents, and has contributed to some of the most high-profile safety disasters of recent years, including the Paddington and Southall rail crashes and the capsizing of the Herald of Free Enterprise (6 March 1987).

The Herald of Free Enterprise

A total of 193 people were killed when the Herald of Free Enterprise capsized on 6 March 1987 after it set sail from the Belgian port of Zeebrugge with its inner and outer bow doors open. The investigation into the incident uncovered a string of management and system failings leading to the fatal human error with the bow doors.

But even if human failings play a part in most accidents, the individual is usually not the (only) problem; rather it’s the systems and culture in which they operate. In the Gym prosecution (above), human error was the trigger cause, but it was management’s failure to enforce procedures and monitor staff that created the circumstances in which the accident could happen.

Whatever your take on the argument, so long as it’s true that mistakes cannot be eliminated, the health and safety manager’s focus must be on error management: designing and enforcing systems that minimise the chance of an employee’s oversight or lapse resulting in someone getting hurt.

Before considering the systems and culture employees operate in, it’s worth eliminating other contributors to risk such as lack of competence, workload and fatigue.

Types of Human Error that cause accidents

It is important to be aware that human failure is not random; understanding why errors occur and the different factors which make them worse will help you develop more effective controls.

Some errors are slips or lapses, often “actions that were not as planned” or unintended actions.

The HSE identifies four types of human failure, as follows:

Slip: when a straightforward physical action, that is performed regularly, goes wrong: a worker presses button A rather than button B. Slips can be avoided through better design of controls.

Lapse: a failure in concentration: an employee is interrupted during a task and misses out a stage as a result. Such lapses can be avoided by using checklists to tick off tasks, or through careful supervision.

Mistake: a mistake results from a lack of understanding or an error in diagnosis planning, for example when an employee without the right information or experience tries to resolve a problem but actually causes another. Mistakes can be prevented by raising competence levels or using special procedures to resolve issues.

Violation: a deliberate breach of procedures, such as knowingly fitting a wrongly specified part to avoid having to get a replacement. A positive safety culture, where staff follow procedures and learn from incidents, will minimise the chance of workers committing deliberate violations. 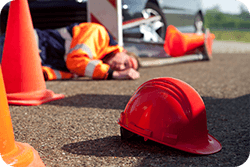 When looking at how to reduce the number of human mistakes in a particular work process or area, the most obvious place to start is often training and competence.

If you’ve recently changed a work process or introduced a new piece of machinery and there’s been an increase in accidents, could it be that not all employees have been adequately trained?

Accidents in the workplace – more Information on Managing Human Failure:

More information can also be found on the Risk Assessment and Human Factors in Incident Investigation pages.